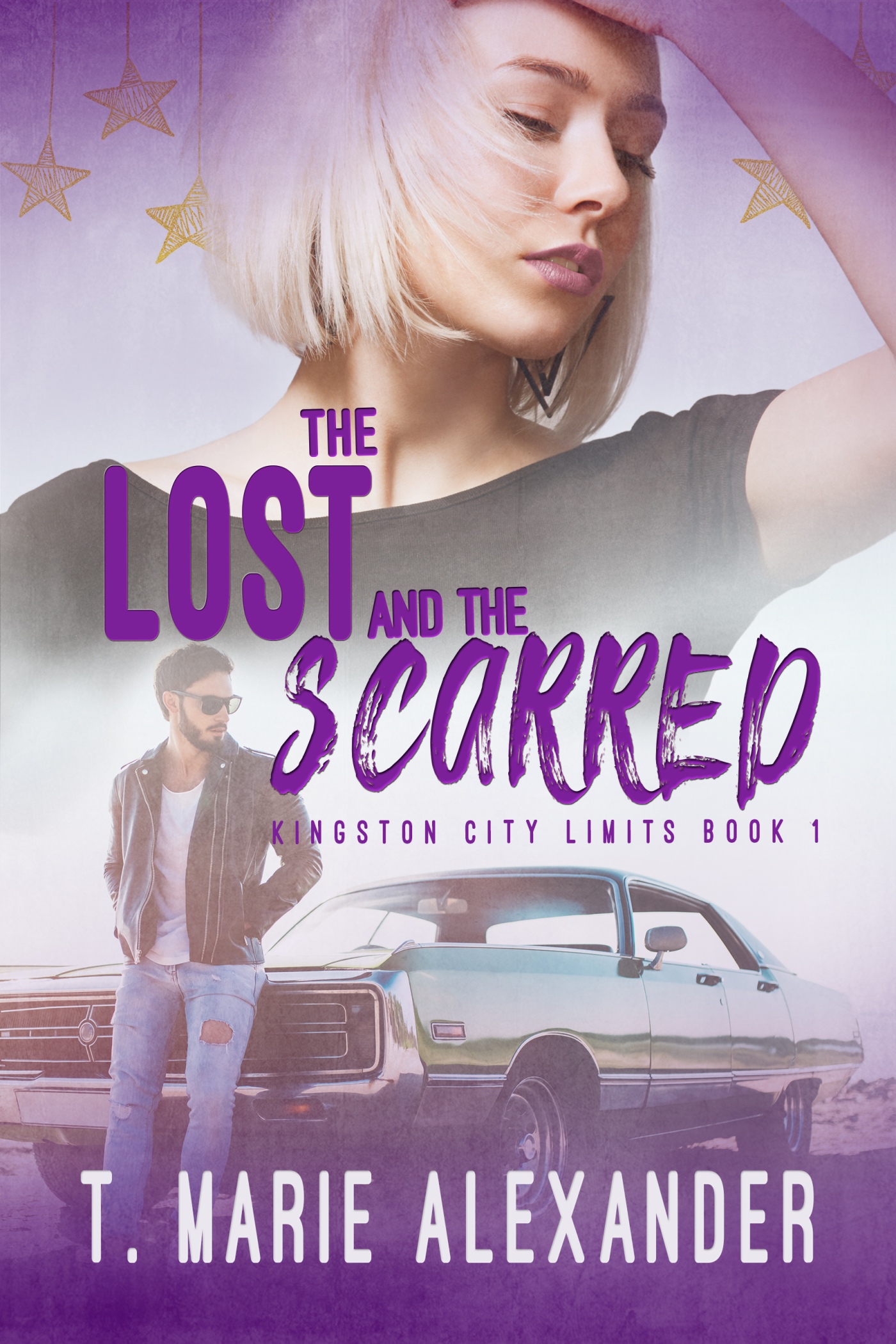 Remember back in August, when I helped reveal the cover of The Lost and The Scarred, by T. Marie Alexander? Well, I’m happy to say that Alexander is back today, this time to answer a few questions for us.

So take a few moments to settle in, and let her tell you a bit about her writing career, her books, and what inspires her work.

Tell us about your writing career? How long have you been writing?
Writing wise, I’ve been doing it since I was seven. I decided to make it into a career ten years ago when I was a sophomore in high school. Ten years. Man, I’m getting old. My first book was a YA science fiction about a teen alien whose planet is at war. I must have sent out a hundred queries even though the story was no where near ready to be seen by agent eyes. Needless to say, I got rejected a lot, and it really messed with my confidence. I ended up putting writing on the back burner for a few years and focused on fashion design. It wasn’t until my father died in 2015 that I went back to writing. I did a ton of research, some rewrites on that science fiction, and had it professionally edited. I published and dedicated that first book to my father later that year. I’ve been writing and publishing ever since. I couldn’t be prouder of where I am today. My writing grown. I’ve grown. And I’m truly amazed by THE LOST AND THE SCARRED.

How did you choose your genre?
This was the hardest thing about deciding to self-publish. I consider myself a reader first and foremost. And I read in every genre. Okay, not every genre. I can’t read nonfiction. I’ve tried; I get through maybe a chapter. Anyways, I dabbled in a few genres. YA science fiction, YA paranormal (this book did not get published), and YA contemporary romance. I found out that I’m better at writing contemporary romance. Readers liked my contemporary story way more than my science fiction series, but many of them said that it wasn’t YA—that my topics are too mature for young adults. With THE LOST AND THE SCARRED I’m transitioning into a more mature YA/NA genre. I’m pretty sure this is my sweet genre. But who knows? It’s me we’re talking about. I’ll probably end up dreaming a crazy story that doesn’t fit in to that genre and write it anyways.

Can you share a little about your most recent book?
Sure! THE LOST AND THE SCARRED is about an eighteen year old girl and a twenty three year old guy, Rox and Wran, who have basically grown up together. Wran found Rox bury in a snowbank when he was a child and decided to take care of her. He had to go away for a few years, but when he comes back, the girl he left behind has grown and changed. She more secretive and broken. Rox and Wran have to find a way to get over his absence and a few things that occurred during his time away.

Tell us a little about other books you’ve published. Series, or standalone?
My very first book I published is a YA science fiction, ZOLA FLASH. It’s the first book in a series about a teen alien that escapes her home world and comes to Earth. She’s traveling with a guy who is supposed to be her enemy, but she can’t help but fall for him. Once on Earth, Zola starts finding out things about her past that she would have rathered stayed in the past, and the people she was running from on her planet starts searching for her on Earth. I also have REVELATIONS which is a YA contemporary romance that focus on the life of Antoinette Justice as she battles depression. She’s searching for someone to accept her and looking in all the wrong places. The one person that does accept her turns out to be the basketball coach at her high school.

How did you come up with your title?
I suck when it comes to naming my work. If I could publish them with a cover and no title, I would. Lucky for me, I have a husband that is great with coming up with things. It may take in a few tries, but his ideas are always better than mine. The original name for THE LOST AND THE SCARRED was HIS LOST GIRL. But as most writers know, the story never stays true to the original outline and that name became obsolete. My husband and I went back and forth on THE LOST AND THE SCARRED until I finally gave up.

What inspires your work most?
Most of my ideas come from my dreams. I wake up in the middle of the night and write them down. Or super early in the morning. I feel like dreaming an entire story is cheating though. Most times they aren’t even things I’ve thought about or even seen. THE LOST AND THE SCARRED was different though. While it started out as a dream, the dream was basically a song I had been listening to on repeat.

Are you working on a new story now? If so, please share a little about it?
Currently, I’m working on the sequel to THE LOST AND THE SCARRED, along with a Kingston City Limits novels. The sequel picks up right after the events of the first novel. I’m also working on a secret project that I don’t want to share too many details about.

Do you have a website?
Yes! It’s www.tmariealexander.com. You should go check it out.

About The Lost and The Scarred

When I was six, Wran Belmont found me buried in snow and gave me a place to live.

He became my best friend.

When I was fifteen, I gave him all of me—only for him to abandon me.

Now, he’s back and expecting the lost, scarred girl he’s left behind. I’m not that girl anymore. And while I may still have secrets, it will not be as easy for him to retrieve them this time around.

When I was eleven, my father lost his job and became a pathetic excuse for a father. A few months later I found Roxanna Raine buried in snow, barely hanging on to life.

Her father was the reason mine was an alcoholic, and I thought about letting her freeze to death.

One look in her eyes and she became my kryptonite. I swore I would get my revenge, though, even if it was on the fair-skinned beauty.

When I was nineteen, I left Rox without an explanation—broken-hearted and even more lost.

Now, I’m back and I’ll do anything to make up for the stolen time.