Hey, there! I’ve got a special treat for you today. Remember back in December, when I helped reveal the cover for Vanessa Morgan’s Clowders? Well, we got in touch again recently, and she agreed to answer some questions for us.

Let’s jump right into things, shall we?

First of all, thank you for joining us today! Can you give us a brief introduction?
My name is Vanessa Morgan. I’m the author of several supernatural thrillers, a cat book and one horror movie reference guide. My latest novel is called Clowders and it combines my two obsessions – horror and cats.

Let’s start by talking a bit about books. What’s your favourite novel? What book have you had the strongest reaction to, whether it was positive or negative?
My favorite book is a memoir: Carol Drinkwater’s The Olive Farm. It’s about an actress who buys an olive farm in the south of France. The way she writes about food and her new country is sublime, and I love how she describes both her life as a writer at the farm and her activities as an actress in London.

Do you often read outside of the genre that you write? Why or why not?
Yes, I also love to read memoirs and all kinds of non-fiction.

Speaking of writing, what draws you to write the genre(s) that you do?
I’m a horror fan at heart. I’m totally passionate about horror movies in particular. It’s always been that way. I’ve seen the most obscure ones out there, even those that have never been released on DVD or Blu-ray, and my favorite pastime is going to horror film festivals around the world.

Which was your favourite scene to write in Clowders?
I really liked writing the scenes in which the reader realizes something is wrong but can’t pinpoint what it is. Creating an eerie atmosphere is a lot of fun. And the scenes at the cat fair, of course.

Which was the hardest?
There was one scene in which Jess tries to convince her husband they are in danger and have to leave the town. It’s so easy to fall into clichés with such a scene while it has to be 100% believable. Another scene that was difficult to write was when one of the characters is found dead and dozens of cats crawl over her body like a living shroud. The scene was really vivid and unsettling in my mind but my words didn’t convey the same creepiness. I think both scenes have turned out well now, though.

And finally, what does literary success look like to you?
I think it’s a combination of different factors. To me, literary success means being good at what I do and creating the type of books I can be proud of. But it also means selling enough copies so I can make a living out of it. I’m not interested in selling a million copies and becoming famous. It’s all about respecting and honoring the genre and spending as much time as possible working within that niche.

Clervaux, Luxembourg. This secluded, picturesque town in the middle of Europe is home to more cats than people. For years, tourists have flocked to this place – also known as “cat haven” – to meet the cats and buy cat-related souvenirs.

When Aidan, Jess and their five-year-old daughter, Eleonore, move from America to Clervaux, it seems as if they’ve arrived in paradise. It soon becomes clear, though, that the inhabitants’ adoration of their cats is unhealthy. According to a local legend, each time a cat dies, nine human lives are taken as a punishment. To tourists, these tales are supernatural folklore, created to frighten children on cold winter nights. But for the inhabitants of Clervaux, the danger is darkly, horrifyingly real.

Initially, Aidan and Jess regard this as local superstition, but when Jess runs over a cat after a night out in the town, people start dying, one by one, and each time it happens, a clowder of cats can be seen roaming the premises.

Are they falling victim to the collective paranoia infecting the entire town? Or is something horrible waiting for them? Something unspeakably evil.

Aidan and Jess’ move to Europe may just have been the worst decision they ever made.

Vanessa Morgan is known as the “female version of Stephen King.” Three of her works (The Strangers Outside, Next to Her, A Good Man) have become movies. When she’s not working on her latest book, you can find her watching horror movies, digging through flea markets, or photographing felines for her blog Traveling Cats. 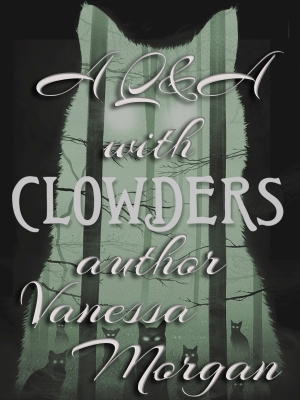 1 thought on “A Q&A with Vanessa Morgan, author of Clowders”