Sun Storm, by Marlow Kelly, sounds like exactly that type of novel. The summary had me hooked, and I couldn’t resist helping to reveal the cover. And I have to say, the cover helps build suspense just as much as the summary. 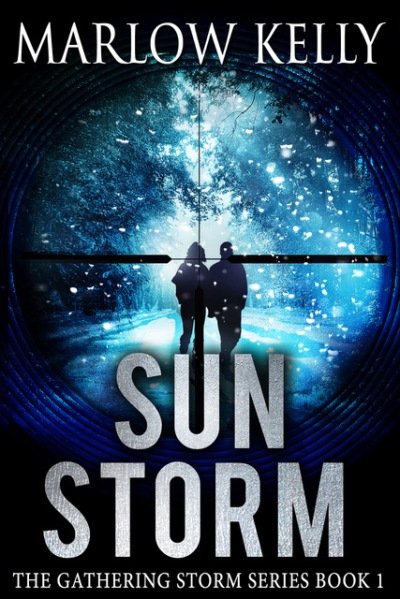 I love everything about this: The couple caught in the crosshairs, the chilly feel of the blue snow, the sleek steel look of the font. It’s definitely the type of cover to make me pick up the book when I see it in a store.

Dr. Marie Wilson is a scientist on the verge of a breakthrough. She has come to Montana on the eve of a blizzard to prove her small, portable solar panel can generate electricity even in the harshest environment. But when four men invade her remote cabin with plans to kill her, she knows she’s in trouble.

Ex-Special Forces soldier, David Quinn, has had enough of danger and death. All he wants is to be left alone on his Montana acreage to pursue his dream of being a beekeeper. But when his old mentor convinces him to help retrieve a stolen solar panel, he thinks it will be a simple job. But the moment he sets eyes on Marie, he knows their assignment is all kinds of wrong.

Together, they escape. Chased by a businessman with unlimited resources, a gunman and a corrupt police force, they are thrust into the frozen Montana landscape. Can a cynical soldier and a naive scientist learn about love and trust in order to survive?

After being thrown out of England for refusing to drink tea, Marlow Kelly made her way to Canada where she found love, a home and a pug named Max. She also discovered her love of storytelling. Encouraged by her husband, children and let’s not forget Max, she started putting her ideas to paper. Her need to write about strong women in crisis drives her stories.

She is an award-winning author, and a member of the Romance Writers of America.