Alright, everyone, time for a quick story. Recently, my coworkers and I decided to have a potluck lunch. We have these every few months, so I like to try to come up something a bit different to bring with me each time.

For this particular potluck, I decided I would bring individual servings of Lemon Hazelnut Tiramisu (the recipe I was planning to work with was this one, from Giada De Laurentiis). I found little serving dishes – well, technically, large plastic wine glasses – some ribbon to decorate the dishes with, and most of the ingredients. Unfortunately, however, I had a bit of trouble with the last few ingredients. Specifically, hazelnut flavouring (I was a bit hesitant to bring boozy desserts to a during-work-hours function), ladyfinger cookies and mascarpone cheese. When that bit of trouble turned into a complete inability to find what I needed, I realized I needed to change course.

That’s what led me to Sorted’s Fluffy Strawberry Mousse. 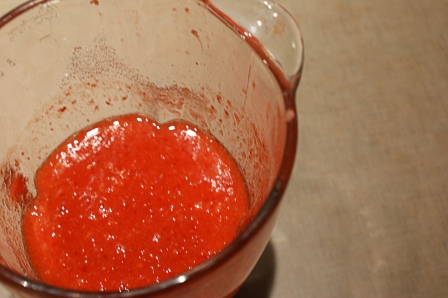 It took a bit of looking to find a recipe that didn’t include gelatin – not only did I not have gelatin at home, but I also wanted to bring something that my vegetarian coworker could eat. But eventually I found one that was made entirely of ingredients I had on hand (well, if you don’t include all of the toppings Sorted used) and that uses egg whites in place of gelatin.

The recipe turned out to be fairly easy. You just puree the strawberries with lemon juice and sugar, whip some heavy cream, and whip a couple of egg whites. You want to make sure you don’t over-whip anything, of course, but other than that, there’s not too much to worry about. Even doubling the recipe wasn’t a problem. 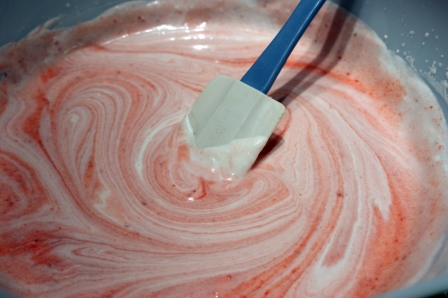 The only part that I did have a bit of a problem with – and this is my own fault – is that I had a bit too much strawberry puree. The recipe uses weight when measuring the strawberries, which threw me off slightly, since I don’t have a scale.

But, luckily, this didn’t cause too much damage. The extra puree ended up on the bottom of each of the cups, while the rest of the mousse stayed on top. And the bit of puree didn’t seem to be a problem with my coworkers, either. They said they liked the way it made the mousse look, and it added an extra burst of flavour at the end. 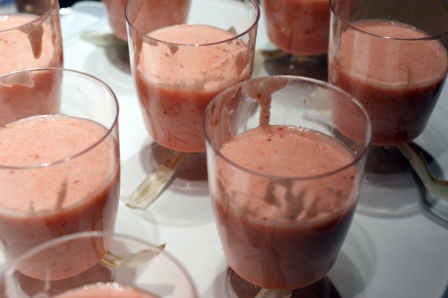 I left the mousse to set overnight, and then added some whipped cream to the top of each cup (sorry, I don’t have a photo of that last step). I left them in the fridge at work until lunch, and they were ready to go when it came time for dessert.

Overall, this is definitely a recipe that I’ll be making again. I think it’ll be a good base for experimenting, too; other fruit can likely be used in place of the strawberries, and other additions – such as chocolate – shouldn’t be too difficult to incorporate.