Do you remember when I featured an excerpt from Laney Wylde’s If She Were Blind a couple of weeks ago? Well, today I’m happy to be welcoming Laney back, this time to answer a few questions for us.

She’ll be talking about everything from some of the secrets hidden in her book to the genres that she most enjoys reading. She has some great things to say–especially about If She Were Blind–and I’m sure you’ll enjoy hearing from her.

But rather than me telling you about what she wants to say, how about we just jump right into things? 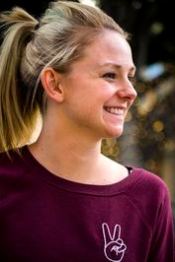 Which was the hardest scene to write in If She Were Blind?
Without giving anything away, Chapters 31 and 33. I wept writing those chapters, especially 33. It wasn’t that I hadn’t written sad or dark scenes before, it was that I hadn’t ripped them from such a recent real-life story. The tears were not only for my characters, but also for the people they were based on, so it hit doubly hard.

Which was your favourite?
It’s a toss-up between the strawberry ice cream/peanut butter cookie scene and the catfishing scene. One was so delicate and romantic, the other so absurd I wanted to see how far I could take it. I love how both turned out.

What book, that you’ve read, have you had the strongest emotional reaction to, be it positive or negative?
Redeeming Love by Francine Rivers. It’s the only book I’ve read more than once, and I’ve read it six or seven times. It makes me cry each time. So good.

Is there a fictional character that you would say you relate to most?
Do my own count? If so, Sawyer from Never Touched.

Do you often read outside of the genre(s) that you write? Why or why not?
That’s a hard question because (1) I don’t read a lot of fiction (I know, I’m a fiction author! I’m a fraud!) and (2) I genre bend when I write. I love me some good legal nonfiction about political corruption or something psychological. When I do read fiction, I love intelligent romance and dark thrillers. Colleen Hoover and Gillian Flynn are some of my favorite authors.

Do you hide any secrets in your books that people can only find if they look closely, or that only a few people can find?
Yes! Often the names of my characters are significant, such as named after people I know or picked because of their meaning. When I name a main character after someone I know, it is often for a reason. The setting in Never Touched is deeply personal as it is based in my childhood hometown. Friends will often find little facts from my life like those hidden in my writing. Also, I use some real-life stories, and I love when people know which ones I drew from. Lastly, I use a motif in Never Touched that my beta readers didn’t catch at first. We’ll see if others do when it’s out.

What would you say is your biggest writing-related weakness?
Being too insecure to write freely or write at all.

If you could tell your younger writing self anything, what would it be?
Don’t think about people reading it. Write what you have to write, as if no one will read it, then edit it so anyone can.

And finally, what does literary success look like to you?
I’d love to be a USA Today Bestselling Author. But, if I don’t get that far, I’d at least like to pay for my son’s piano and gymnastics. That’d count as success, right?

About If She Were Blind

Not everyone can get justice the traditional way—that’s where Estlyn Collins comes in. A young lawyer in Santa Monica, her “legal” service, After Twelve, works outside the courtroom to tip the scales when the justice system has failed.

Thanks to her powerful underground network, Estlyn’s success rate is stellar, and her inbox stays filled with inquires from the desperate and vengeful. But when one of those names is a ghost from her past seeking vengeance against her, she’s shaken to her core. Off balance and scared to be alone, she makes an impulsive move for a guy. He’s a complication she doesn’t have time for, but it turns out he may also be an unlikely—if unwitting—asset.

Treading the rapidly thinning line between personal and professional, Estlyn pursues her target while outrunning the one on her own back—only to find she may be running into a lot more than she bargained for.

IF SHE WERE BLIND is the first book in the engaging New Adult series AFTER TWELVE by author Laney Wylde. Perfect for fans of the television shows REVENGE, SCANDAL, and VERONICA MARS, the AFTER TWELVE Series is a gritty social-issue drama that delivers steamy romance, intrigue, and the most bittersweet revenge plots. Estlyn’s determination to right every wrong is sure to quench your thirst for justice, yet leave you wanting more.

When Laney isn’t writing, she’s singing Taylor Swift with her little boy or asking her husband not to tell her about his work as a surgical resident while she’s eating. She daydreams about using her math degree to get into law school, then realizes that would be too much work and that she should just play pretend court on paper instead. While she loves a good book, nothing beats 30 Rock with a bag of popcorn and M&Ms.