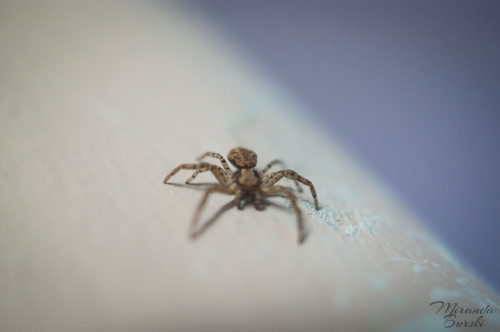 I’ll say right up front that today’s picture didn’t come out quite as well as I wanted it to. It isn’t as in focus as I’d like it to be.

But, I don’t think it’s entirely terrible. Especially when you consider how much I hate spiders. I was on edge the whole time I was taking this little guy’s picture. Any time this spider moved, I jumped back.

Which is probably why I had so much trouble getting him in focus.

The only reason I was able to take this spider’s picture at all was because he was so little. Any bigger, and I would have been too nervous to even try. I managed it, though, and then I let him crawl onto a piece of cardboard and put him outside.

It was a short adventure, but at least I got some photo practice out of it.

4 thoughts on “One little spider”