Sweet and funny–it’s such a wonderful combination. And I can’t ask for much more when it comes to a romance novel.

I knew when I read the summary for Jessie Donovan’s Crazy Scottish Love that I had found the exact type of comedic romance that I tend to enjoy most. Today’s excerpt only provided extra confirmation, and somehow managed to make me want to read the book more than I already did.

That wouldn’t have been an easy thing to do, let me tell you.

It will, however, be easy for you to get just as hooked on this novel as I am. Before you do, though, take a moment to enter Jessie’s rafflecopter, where she’s giving away a $25 Amazon (US) gift card, a tartan scarf, and a mini-swag pack of goodies from Scotland. 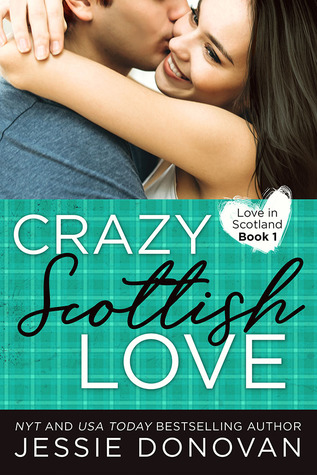 However, the peaceful sound of the wind and seagulls as Donella enjoyed the enchanting sight didn’t last. Something smacked her on the side of the head. She lost her balance and fell on her ass.

After a string of profanities that would no doubt earn her a scolding later on, Donella slowly sat up and touched the side of her head. Looking at her fingers, there wasn’t any blood.

A Scottish male voice she didn’t recognize shouted, “Are you all right?”

Donella looked in the direction of the sound. A tall guy with short, reddish-brown hair rushed toward her.

Before she could do more than open her mouth, a large black and white dog dashed past the man and stopped in front of her. He promptly put his nose to her privates.

He bumped and sniffed around, reminding her why she preferred cats. Sure, both sniffed butts, but at least with cats they sniffed other cats and left her lower body well enough alone.

The dog rose its head, a bright green ball in its mouth. The dog dashed back toward the man and dropped it at his feet.

She’d found her attacker. “Is that how you always welcome tourists to the island? By pelting them with hard balls and knocking them on their butts?”

The corner of the man’s ticked up. “Well, to be fair, only a tourist would be dressed like that. So you would be an easy target for anyone who was out to find them.”

She wasn’t embarrassed about her yoga pants and T-shirt. A combined thirteen-hour plane ride wasn’t meant to be a fashion show. “I’ll make sure to mention how the locals hit tourists and insult their attire on my online review.”

He shrugged a shoulder. “I doubt you’ll do so. After all, it would affect everyone on the island, and I don’t think you’d want that.”

Before she could ask how he knew she wouldn’t, a little girl of about six or seven peeked her brown-haired head out from behind the guy and stepped to the side, holding one of those ball-tossing things dog owners liked to use. She glanced up at the man. “Should I say sorry? I didn’t mean to hit her.”

Donella suddenly felt like an ass. She wasn’t the best person with kids, but from her own childhood, she knew full well how mini-disasters could happen without warning.

The man placed a hand on the little girl’s shoulder. “I’d apologize to Donnie now or you’ll have to face old Mrs. Spencer later.”

The girl’s eyes widened, but Donella focused on the man’s revelations. “How do you know who I am?”

“Putting aside how your gran’s been going on about your visit for weeks, this isn’t the first time we’ve met.” He bowed his head. “Robbie Campbell, at your service.”

A memory from twenty years ago, of her being stranded on a tiny slip of land with water on one side and a small cliff behind her, came rushing back. She pointed a finger. “You. You’re the reason the police and fire brigade had to rig a harness and rescue me.”

He put up a hand. “Don’t blame me. You were the annoying ten-year-old following me around all summer. Everyone around here with good sense knows not to go out there when the tide’s about to come in.”

Donella narrowed her eyes. “Local knowledge that relies on ‘good sense’ only works if you live here. You should’ve known that and warned me.”

Again, he shrugged one shoulder. “I was almost thirteen and assumed I was king of the world at that point. Besides, an American always on my heels was a nuisance. My mates teased nonstop and I wanted it to end. Stranding you during high tide did the trick.”

She growled. “I could’ve drowned.”

“But you didn’t. Who do you think called the authorities to rescue you?”

Donella searched her mind for a good come back. They never came when she needed one.

Before she could even sputter something halfway witty, the little girl asked, “Why are you angry at my daddy?”

Tired of the online dating scene and her nagging mother, Donella Spencer braves her eccentric extended family and heads for a month-long visit to Scotland to stay with them. As long as she keeps to herself and avoids her family as much as possible, it should be easy to relax, right?

What she doesn’t count on is running into Robbie Campbell, the guy who tried so hard to ditch her nearly twenty years ago that it took a search and rescue team to save her. Not only that, she doesn’t expect to fall for Robbie’s daughter’s big, brown eyes and agree to hold a themed costume party for Donella’s 31st birthday. One that involves her relatives dressing in nineteenth century safari garb and dusty, old animal outfits.

And none of that even begins to address her grandmother’s attempts to matchmake and marry off Donella within the month.

It’s going to be one long, trying summer in Scotland. However, sometimes the strangest situations can show what someone needs in life. Because if Donella falls in love with a man who can put up with her family, she may finally have her happy ending in sight.

Sign up for Jessie’s newsletter and never miss a release or special.

Jessie Donovan has sold over half a million books across multiple formats, has given away hundreds of thousands more to readers for free, and has even hit the NY Times and USA Today bestseller lists. She is best known for her dragon-shifter series, but also writes about magic users, aliens, and even has an upcoming crazy romantic comedy set in Scotland. When not reading a book, attempting to tame her yard, or traipsing around some foreign country on a shoestring, she can often be found interacting with her readers on Facebook. She lives near Seattle, where, yes, it rains a lot but it also makes everything green.