This is my first time doing a cover reveal, and I couldn’t be more excited for it. This cover is gorgeous, you guys. Seriously. And the book sounds super interesting; I can’t wait to read it.

Before showing you the cover, I want to tell you a little more about the book. It’s New Adult Elf Punk (Urban Fantasy); I’ll admit, I haven’t read Elf Punk before, but I’m definitely curious about it now. Here’s the blurb:

Saving the world, one tour stop at a time.

Eighteen-year-old Bitsy Butler has never quite fit in, not with the dragons who raised her, the druid who took her in, or even with the non-human members of the cirque noir punk band she thinks of as family. Her chance to prove she can make it on her own comes with her band’s first big solo tour. It’s all going according to plan when an angel walks into a bar and demands help with his demon problem.

If she doesn’t step up, a magical war will break out, threatening Arizona and all those who call it home. With the help of a human, a sexy dragon, and the members of her band, Bitsy must stop an angry mob of chaos demons before the band leaves for their next tour stop.

It’s nice to be needed, but Bitsy has no idea how to defeat the demons and she just might get herself killed trying. But then, at least one problem would be solved…

So, are you ready to check this one out? Here it is: 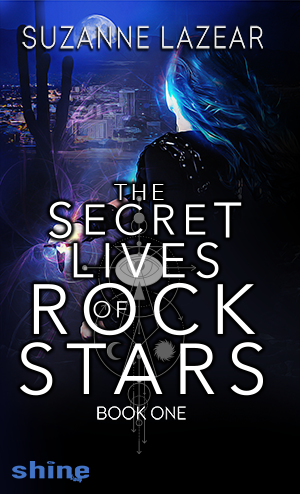 Don’t you just love it? Those colours, and the imagery, get so much across. I’m definitely going to have to add this one to my “Love the Cover” list on Goodreads.

If you don’t have this one on your to-be-read list, yet, make sure to add it. In the meantime, go and enter the Suzanne’s giveaway, for a $10 Amazon gift card. I’m sure you could find some use for it… like maybe pre-ordering the book?

Excerpt from The Secret Lives of Rockstars
“I’m Jake, Jake Messenger. I’d like to speak with you alone, if you please.”

My blood ran cold and everything around us ceased to exist. “Why?”

But I knew. There was only one reason why one of the Grigori would seek me out.

Somehow celestials just knew when someone could work gates properly, especially the angels who walked the Earth. Anyone could make gates, but it took a linewalker to work them without it being suicide. Linewalker wasn’t a race, but an inherent ability. One I had.

Also, if the celestials – the angels, demons, and the like – needed help from outsiders, things were very bad. The kind which ended in running, screaming, and death.

I so didn’t need this right now. 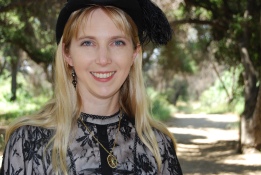 Suzanne Lazear spins tales of the fantastic. She’s the author of the New Adult Elfpunk The Secret Lives of Rockstars (Leap Books) and the YA dark fairytale steampunk series The Aether Chronicles (Flux). Suzanne lives in Southern California with her daughter and husband where she’s trying to make tiny dragons out of wool. One day she’ll actually create a working cupcake cannon.

One thought on “Cover reveal: The Secret Lives of Rock Stars, by Suzanne Lazear”