Sometimes, all it takes for me to be hooked by a novel is a single question. That’s it. One line, maybe ten words, and a question mark.

That’s exactly what happened when I read the summary for Sneaking Out, by Chuck Vance. That first line–which you’ll see in a moment–grabbed me and refused to let go. The excerpt I’m sharing today only helped strengthen that grip.

Give it a read for yourself, if you don’t believe me. Before you do, though, jump on over to Chuck’s Rafflecopter, where he’s giving away signed copies of Sneaking Out and $25 Amazon gift cards. 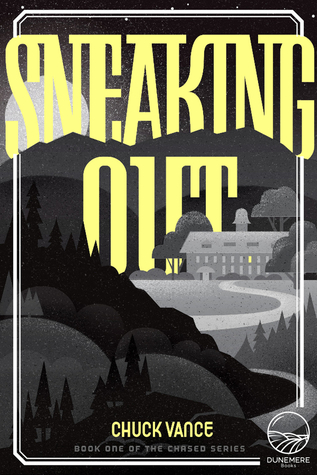 Could you sleep next to a murderer?

Luke Chase—yes, that Luke Chase, a modern hero ripped from the headlines—didn’t mean to get caught up in Mrs. Heckler’s murder. He just wanted to hook up with the hot new British girl at St. Benedict’s, and if that meant sneaking out to the woods after hours, then so be it. But little did he know someone would end up dead right next to their rendezvous spot, and his best friend and roommate Oscar Weymouth would go down for it. With suspects aplenty and a past that’s anything but innocent, Luke Chase reluctantly calls on his famous survival skills to find the true killer.

For fans of “A Study in Charlotte” and boarding school lit, “Sneaking Out” (book one in the “Chased” series) immerses readers in the privileged prep school world, with a mystery that exposes the dark side of life on a residential high school campus.

“Did you check this out?” asked Gupta, sliding a copy of The Southborough Courant toward Luke.

The headline said: Strangler Linked to Prep School Murder. Luke scanned the article. It said that all leads pointed to the Southborough Strangler. There was the position of the body, which was apparently the same as the other two victims, as well as the time of night. It even knew that she had been strangled with a scarf, although it said it hadn’t been able to confirm for sure if it was a St. Benedict’s scarf, but off-the-record reports said it was. This was great news! This could totally exonerate Oscar. Luke wondered if the headmaster had gotten a chance to look at today’s paper. Maybe he had already called Oscar’s parents before it came out, and it was all a big misunderstanding. He hoped that was the case.

“If it’s the strangler, there’s going to be mayhem around here,” said Andy, picking up a gooey cheese fry.

“I think my parents might pull me out,” Brooks said. “But how can I write my college essay on surviving a murder if they yank me out now?”

“I know, my mom is all panicky too, like, sweetie, honey, you take care of yourself,” Gupta said. “Sleep with a weapon under your bed, I know you’re not allowed cutlery but maybe a flashlight, which can also be used to bang someone over the head…”

“Your parents must be crazed,” Andy said to Luke. “Once bitten, twice shy.”

“They know I can take care of myself,” said Luke quickly before changing the subject. “How old do you think this strangler is? If he killed someone ten years ago, he has to be at least what, twenty-eight at the youngest? Or do you think he’s older?”

“Says here in the article they suspect him to be a white male between the ages of forty and fifty-five,” said Andy, pointing to a part of the article that Luke had skipped.

Forty to fifty-five. Dean Heckler fit that profile. Could he have been the strangler long ago? thought Luke.

“You just got here!” said Brooks.

“Dude, you really are a mystery man these days,” said Andy.

“Must be a girl,” Brooks said knowingly.

“I’ll leave you all guessing,” said Luke, slipping away to the counter to order his breakfast before dashing to meet his cab.

Chuck Vance is a pseudonym for a bestselling writer of both adult mysteries and novels for young adults. Vance attended boarding school in Connecticut and graduated from Columbia University. Vance has lived in New York, Moscow, London, Paris and Los Angeles and is frequently on the move.