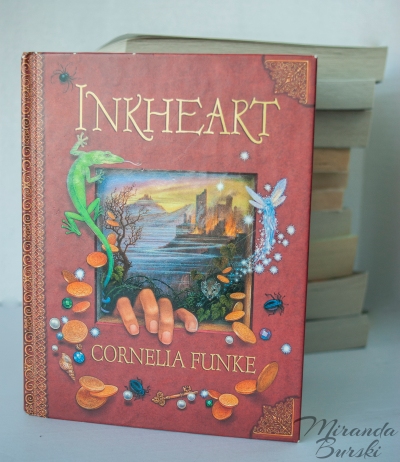 A book about books–is it any wonder that appealed to me?

I came across Cornelia Funke’s Inkheart many years ago, when I was either a pre-teen or in my early teens. True, I don’t remember exactly where I was when I spotted it. What I do remember is that I was hooked as soon as I read the description, and that I couldn’t wait to get home and start reading it.

I’ve read Inkheart a few times since then, and I’ve enjoyed it every time. I always find little thrills of happiness in it: details I’d forgotten, literary references I’ve since come to understand, that sort of thing. There’s always something that makes the book worth re-reading.

And if you haven’t read it in the first place? Well. There’s a whole lot more that you’re missing out on.

Meggie’s father, Mo, has a special gift: when he reads aloud from a book, the characters literally come to life. As Meggie soon learns, however, not all of those characters are friendly. Some are willing to go to any lengths necessary to gain the power they want.

The magic in this book brings a distinct sense of wonder along with it, and that wonder is only heightened by Funke’s writing. Her style is light, but pretty. It’s perfect for the fantasy feel that’s necessary to the plot.

Though I wouldn’t have been able to describe it that way, that’s how I remember feeling about Inkheart the first time I read it. I remember the wonder I felt as the first quarter of the book unfolded. I remember that tight feeling in my chest as I hoped desperately that Meggie, Mo, and Dustfinger would all be okay. I remember being on the edge of my seat as the plot twisted and weaved in directions I hadn’t considered.

And you know what? I felt all of that again now, and I enjoyed it all just as much as an adult as I did as a kid.

Twelve-year-old Meggie learns that her father, who repairs and binds books for a living, can “read” fictional characters to life when one of those characters abducts them and tries to force him into service.

Characters from books literally leap off the page in this engrossing fantasy. Meggie has had her father to herself since her mother went away when she was young. Mo taught her to read when she was five, and the two share a mutual love of books. He can “read” characters out of books. When she was three, he read aloud from a book called Inkheart and released characters into the real world. At the same time, Meggie’s mother disappeared into the story. This “story within a story” will delight not just fantasy fans, but all readers who like an exciting plot with larger-than-life characters.