I’m sure this isn’t something I need to tell you, but I’m going to go ahead and say it anyway: Every writer does things differently. Not just in regards to style or ideas, either. The actual act of writing a story is different for each of us. We focus on different aspects of the story at different times, and we each struggle with different elements.

Personally, I love hearing how other writers draft their stories. There’s always something to learn from that, don’t you think? So I thought, to return the favour, that today I would tell you a little bit about how my stories come together.

In particular, let’s quickly talk about some of the ways in which my first drafts are different from my later drafts.

Like most writers, my first drafts are nowhere near complete. They’re a place for me to get the basics of my story down, along with some details that, if I’m being honest, are likely to change along the way.

I use writing the first draft as an opportunity to connect ideas. I focus on the elements that strike me most strongly: the plot and a good chunk of character development. You see, when I’m developing an idea–when I’m taking it from a what-if to a full-out this is what would happen–those are the elements I can see most clearly.

That’s not necessarily the case for all writers. For some, the setting plays a bigger role, or the time period their story is set in. While pieces of those elements sometimes play into my what-ifs, they don’t often affect them the way plot and character do.

That said, I don’t ignore those other elements entirely. I do incorporate bits of them in my first drafts, but the references tend to be fairly small and relatively rare. It’s in my later drafts that I colour the setting, that I describe how my characters look and behave, and that I iron out the timeline. And it’s in my later drafts that I adhere to that oft-heard phrase “Show, don’t tell.”

Plus, of course, there are line edits. While I fix these as I find them, I make them a particular focus once I reach my fourth (ish) round of revisions. It’s generally at that point that I’m pretty happy with the manuscript overall, and when I’m hoping smaller edits are all that are needed.

So, there’s a short overview of the biggest differences between my first drafts and my later drafts. To my fellow writers out there: what are yours? Do we have any in common, or is your process fairly different from mine? Either way, I’d love to hear about it. 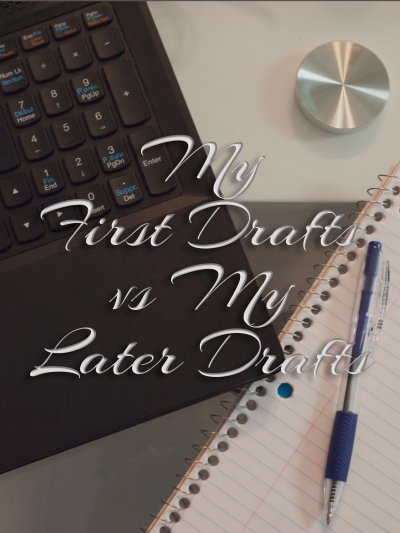