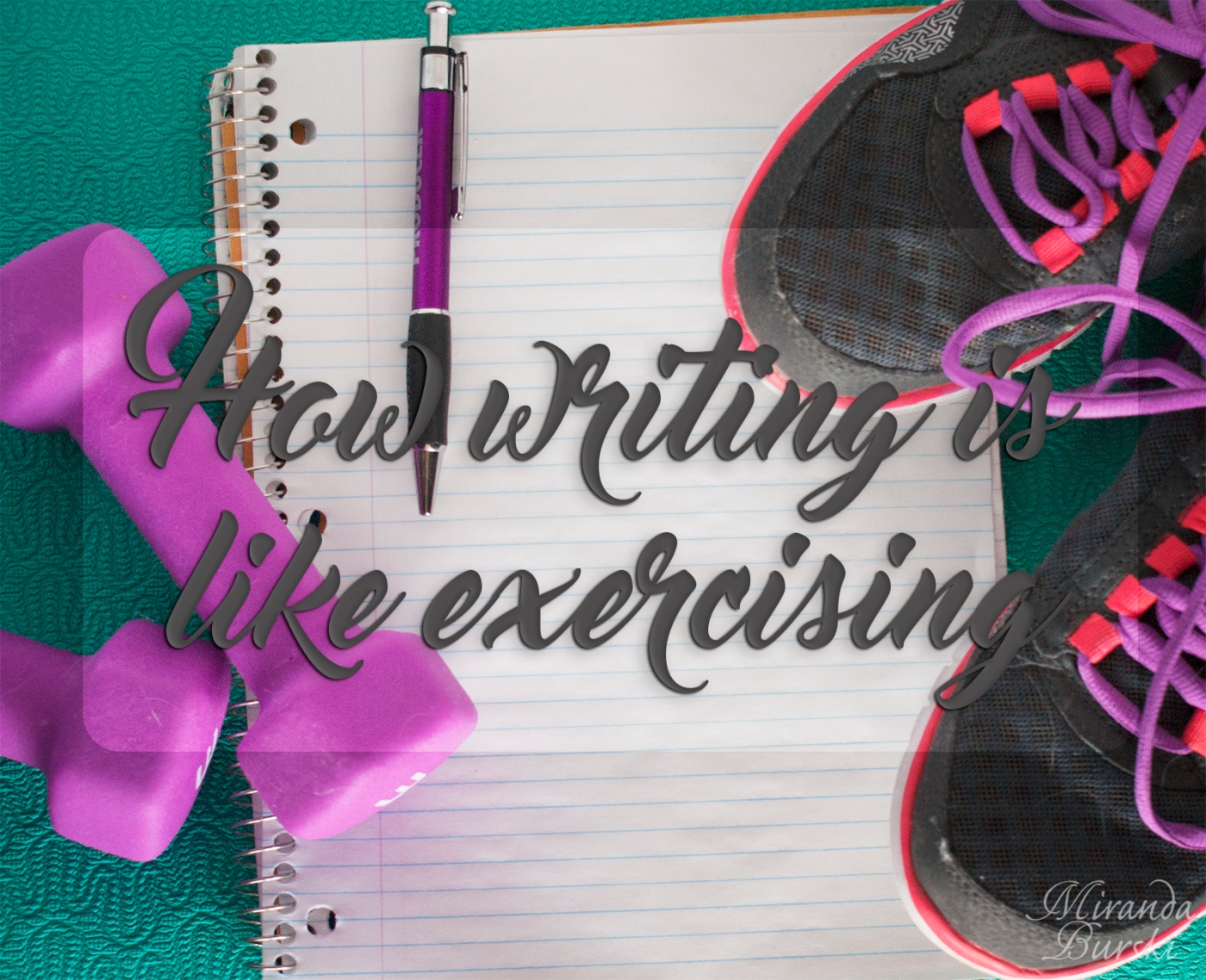 This past summer, I fell into a pretty good exercise routine. Or good for me, anyway. I was doing yoga at least twice a week, often more, and taking part in a learn-to-run program. Add in my daily walks, and I had a fairly decent fitness routine.

Then I injured my knee during one of my not-quite runs. I was about three-quarters of the way through a run one Saturday morning when my knee started to hurt. By the time I’d hobbled my way home, I couldn’t bend or straighten it anymore.

While my knee injury isn’t completely gone (it’s likely a torn meniscus, but I’m waiting to see a specialist to confirm it), it is much better than it had been. Enough so that I’ve decided I need to get back into an exercise routine, albeit one that doesn’t go to the same extent as the last one did. I’m just having trouble falling into one again.

It was while I was thinking about that one night that I realized: falling into an exercise routine is an awful lot like falling into a writing routine. If you’re having trouble falling into one or the other, maybe you just need to think about how you’d fall into the opposite.

Those muscles get stiff
All muscles are the same–you need to work them if you want them to stay strong. When it comes to excercise, it’s easy to tell when you haven’t paid them enough attention. You can’t lift the same amount of weight as you used to, or they’re too stiff to move into the same yoga poses.

To fix the problem, you need to slowly work your way back up to where you were. Start with lighter weights, run for shorter distances, or practice some easier poses. It’ll take time, sure, but you’ll be better off for it.

While writing isn’t much different, I do think people tend to treat it differently. Sometimes, when a person hasn’t written in a while, they try to dive right back in to where they were before. Then nothing comes out of it, they get frustrated, and they stop again. The problem is, just like with any other muscle in your body, that generally isn’t the best way to go about it.

If your writing muscles get stiff–if you find that the words aren’t coming out in the right order, or at all–then you need to slowly work those muscles back to where they were. Yes, sit down with that computer or notebook and write, but maybe write something different. Instead of diving straight into that first draft you abandoned three months ago, try some free writing. Or maybe some worksheets; Eva Deverell, for example, has some great creative writing worksheets you can try.

Regardless of what method or source you try, do something. The only way to get past that muscle stiffness is to sit down and write something, slowly building up to the point where the muscles are strong and fluid again.

You won’t always be in the mood, but do it anyway
Let’s face it: few people in this world love to exercise. There are some out there who do, of course, and most people can find at least one type of exercise that they enjoy. But almost everyone has days where they simply don’t feel like exercising.

You know what the best thing to do in that situation is, don’t you? It’s hard, sure. I feel the same way about it. Honestly, though, forcing yourself to get up off that couch and do something is the only way you’re going to create your routine.

So, go to the gym, go for a run, start a yoga session… whatever you need to do, do it. You may only make it through a few reps or a quarter of the run, but it’s more likely that once you start you’ll find that you want to finish.

It’s the exact same thing with writing. Even if you feel like you aren’t in the right mood, you have to pull out that notebook or sit down at that computer. Write for five or ten minutes, whether it’s working on that first draft, doing revisions, or doing a bit of free writing. Just do something; that’s usually all you need to get the words flowing and transition into that “right mood to write.”

It’s worth it in the end
Can you honestly tell me that you don’t believe exercising or writing regularly is beneficial? Both are plenty good for you in the long-term, of course, but they’re also great mood lifters. That’s what I find, anyway.

Whether I’m writing or exercising, I usually experience an afterglow. I’m tired, sure, but I’m also happier and more energized. I feel like I accomplished something. And with writing, there’s also some extra pride and contentment thrown in. Other people experience that after they exercise; it just depends on where your passion lies, I think.

What about you? Have you ever fallen out of you writing or exercising routine and have to find a way to get back into it? What did you do about it?