Every once in a while, when doing these reveals, I come across a cover that I think is really quite beautiful. Everything about it just seems to work–the font, the imagery, the colours. Everything.

Such is the case with the cover of When Stars Come Out, by Scarlett St. Clair. It’s gorgeous, and I can’t help opening it up to look at it over and over again.

Plus, the book itself sounds like it’s going to be a great read. You can’t ask for a better combination than that.

Before checking out the cover and summary for yourself, though, take a moment to visit Scarlett’s rafflecopter, where she’s giving away some art prints.

Alright, ready to take a look?

Isn’t it beautiful? I love the partial silhouette of the girl and the birds, with the stars interspersed on top. The combination perfectly suits the colour choices.

About When Stars Come Out

Anora Silby can see the dead and turn spirits into gold coins, two things she would prefer to keep secret as she tries to lead a normal life at her new school. After all, she didn’t change her identity for nothing.

As it turns out, hiding her weirdness is just one of many challenges. By the end of her first day, she’s claimed the soul of a dead girl on campus and lost the coin. Turns out, the coin gives others the ability to steal souls, and when a classmate ends up dead, there’s no mistaking the murder weapon.

Navigating the loss of her Poppa, her mother’s unpredictable behavior, and Roundtable, an anonymous student gossip app threatening to expose her, are hard enough. Now she must find the person who stole her coin before more lives are lost, but that means making herself a target for the Order, an organization that governs the dead on Earth–and they want Anora and her powers for themselves. 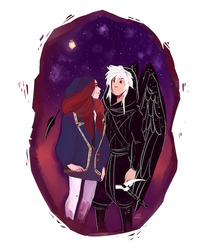 Scarlett St. Clair is a red-hot writer who writes stories for naughty women like her. Whether you’re hiding beneath the sheets reading her stories or acting those fantasies out, she has something for you. She writes stories that combine emotional sparks with pleasure and pain, often focusing on the powerplay present in relationships – but that isn’t all she likes to write! She dabbles in a little bit of everything sexy, and it can all be found on her author page.

When she isn’t teasing the masses with hot smut, Scarlett is a student fantasizing about what it’d be like to have such hot professors. She also enjoys cooking, baking, and watching Netflix, but that usually isn’t as dirty! Sign up for Scarlett’s mailing list here to receive exclusive writing, information on upcoming stories, and other goodies.